Study Sculpture and Drawing at The Parker Studio of Structural Sculpture 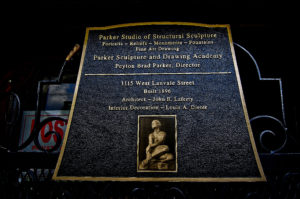 Check the calendar for an ongoing schedule, and click on the class titles for more Detailed descriptions.  Detailed class descriptions also appear below.

ANATOMICAL FIGURE SCULPTURE CLASS: Sundays from 2:00 PM to 6:00 PM. The first session to focus on the construction of an armature, and will not count toward the requisite 13 classes. Optional workshop time for the Anatomical Figure Sculpture Class is Wednesdays, or before, or after Saturday class session. 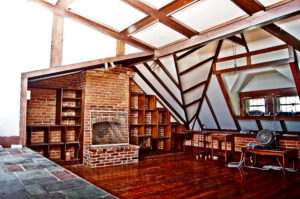 Join us for open drawing and sculpture groups, in which participants can work in our studio space and share the cost of a live model. Please call to arrange for participation. No instruction is offered for the Open Groups, and all levels of experience are welcome.

Classes in Drawing and Sculpture

Classes are private and by appointment. Students are responsible for the provision of materials. 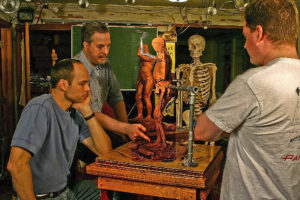 This course consists of 13, four-hour sessions (day), or three-hour sessions (evening). The same pose, and intended Life Model, or Figure Sculpture is each time for the duration of the course. Students will focus on bone landmarks and major muscle groups while working to capture the action of the pose and characteristics of the model. Overall forms will be blocked in through observation of shapes, rhythms and interconnecting commensurate planes, leading to a simplified yet integrated sculpture sketch composition. 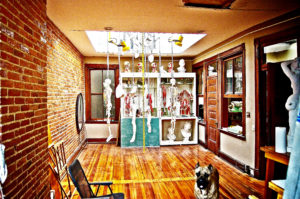 This course will be taught in four parts, each part consisting of 13, four-hour classes (day), or three-hour sessions (evening). The same pose, and intended Life Model, or Figure Sculpture each time for the duration. Working from the model, students will construct an ecorche with exposed skeletal and underlying muscle parts on one side and rendered surface muscles on the other. The first half of the course will focus on the underlying structure while, in the second half, students will work towards completing the overlying muscle masses. All skeletal and muscle shapes will be treated in a naturalistic manner, but with inherent shape content true to the model.

Cost for the course:
$ 1120.00 for each quarter segment consisting of 13 4-hour daytime sessions. 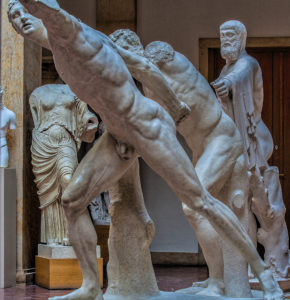 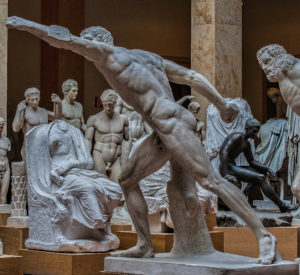 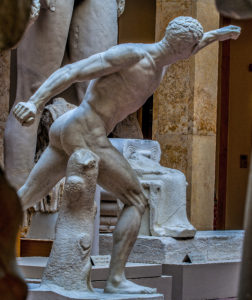 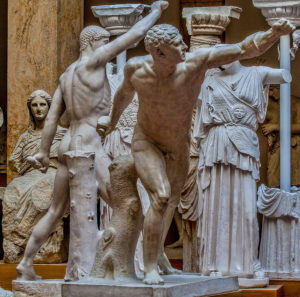 Another aspect of Optical Record sculpture is “Ballooning fields of unified shape”. The “fields of shape” are condensed as a photograph depicts compressed tonalities and out of this appendages appear, or the roll of a large stomach together with tons of fabric, legs, an arm, a hand, maybe several fused together figures – but all arriving out of a common mush of an exaggerated tonality. All appears significant, as though a great movement is taking place. or some contrived photographic flattened gestalt, but actually the static quality in this artificial farce is what is most striking. This effect is typical in much of second half-nineteenth century American and French sculpture. The “August Belmont” statue by John Quincy Adams Ward – the unity of a tonal field gestalt is the main shape of the sculpture – an aspect of tonalities as derived from spatially condensed photography “Ballooning fields of unified shape”. Jutting shapes protrude out of the static condensed mush of tonalities. The tectonic attributes arriving at his impressive realism are carefully articulated as Norman Rockwell would carry out with photographic slides projected onto a screen to copy as larger or smaller scale as well as an alternate solution to the problem of not knowing how to make a sculpture in Greco-Roman heritage terms. The art development process of Norman Rockwell is based on nineteenth century art method from painting, drawing, and sculpture going back in some cases to early precedents of photography in the late 1840s in France, even earlier in transfer copy methods arriving at similar visual problematic results discussed here previously {A further description of “Sight-Size” – “Sight-Size Traite Complet de La Peinture par M Paillot de Montabert Planches Paris 1829” is explained further down this posting page with a descriptive accompanying illustration from the early nineteenth century}. The client, commission, or self determined art project would be carried out with photographic media, and or the equivalent of slides projected onto a screen – the many photos of the subjects along with a more minor attribution utilizing the client or life-model in studio as a secondary source to fill in further detail, as well as seeming credibility working a little bit from life. The combination of figures together with clothing making a composition is not unusual in earlier pre-1800 sculpture, but it has none of the condensed field of tonalities that are seen in the photographically imitated effect. J. Q. A. Ward’s sculpture of Matthew Perry statue, Touro Park, Newport, Rhode Island is another combination of static realism of Optical Record mixed with memorized rote structural templates combined with “Ballooning Fields of Unified Shape”. His Smith Memorial Arch, Philadelphia – the horse and rider are fused as a charcoal tonality drawing made from a photograph – the rider and horse are a single unity shape – “Ballooning fields of Unified Shape” with appendages projecting outwards. It’s a striking two dimensional outline from formal specific viewpoints – but the effect of a charcoal drawing depicting fields of tones after a photograph are static and as such arrive at this stilted sculpture technique. Though as a method of manufacture in an assembly line way it’s extraordinarily efficient. Essentially all of Wards sculpture has attributes of this along with before mentioned “Optical Record” traits. Augustus Saint-Gaudens, Deacon Samuel Chapin Monument (the “Puritan”), 1887, Springfield, MA.and Augustus Saint-Gaudens Adams Memorial” – Rock Creek Cemetery (Washington DC) are extreme versions of “Ballooning fields of unified shape”. The “Ballooning fields of unified shape” portray what looks dimensional to a novice but are actually in opposition to dimensional shape and is not spatially supported organic complex shape as depicted in the best Greco-Roman sculpture lineage. Saint-Gaudens and J. Q. A. Ward had many assistants and students who carried this aspect of photography and composition forward into future generations. Many other sculptors in France, Italy, and the United States in the second half of the nineteenth century were exponents of this “Ballooning fields of unified shape”. This effect of condensed artificial tonalities is extremely attractive to the contemporary viewer – often preferred to pre-modernist and pre-contemporary sculpture, since so much of a sense of comfort derives from the predictable and artificial photographic source. 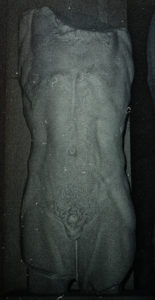 “In 1794, a catalogue was published entitled Casts of antique and modern statues, figures, busts, bas-reliefs moulded from the best originals in Rost’s art dealers shop in Leipzig
(Fig. 6. 1). It listed fifty-four full-scale statues and seventy-five busts as well as numerous small-scale copies and “study pieces” – single hands, feet, monuments and reliefs among others. Fifty-six separately bound copper engravings illustrate a representative range of the most important pieces. This was the first time that the Leipzig art dealer Carl Christian Heinrich Rost (Fig. 6. 2) had published an illustrated catalogue of all the casts of antique and modern sculptures available in his shop.”  2

“The most important pieces were presented in outline drawings. The reduction of the figures to outlines corresponds to Winckelmann’s belief that these constituted the essence of the statues themselves. 4  Short explanatory texts specified the art historical importance of the individual antique sculptures. References to respective museum catalogues and commented catalogues – such as Casanova’s Discorso sopra gl’antichi  5 – emphasize the aspiration to seriousness. The artist commissioned to carry out the drawings, Schnorr von Carolsfeld, was chosen carefully: he was engaged upon the recommendation of the Director of the Leipzig Academy, Adam Friedrich Oeser. 6  Not wishing to provide a mere sales catalogue, the publisher (Rost) explicitly presented himself as a patron of the fine arts: He stated that he had not spared himself any effort to obtain the casts of the best antique artefacts in order to offer them to connoisseurs of the fine arts at a reasonable price.”
7

“Around 1770 the small range of existing plaster casts was commonly regarded as a lack. Hence, Johann George Sulzer postulated in his Allgemeine Theorie der Schönen Künste […] of 1771, that all academies should have a complete collection of the best antiquities. According to him, the only reason why this had not been the case was that the permission for taking moulds was too often refused.
13  Goethe’s personal reports document the alternatives available. According to him, sculptural works had been hard to find during his youth in Frankfurt. Only later did Italian plaster moulders arrive, bringing with them original casts, making new moulds and recasting them. These casts were obtainable at a fairly low price, so that he was able to build up his own small collection.  14  Since 1707 the Düsseldorf Electoral Prince Johann Wilhelm had started to compile a first class collection of casts taken directly from antique originals.  15  Conte Fede – himself a renowned collector – acted as his negotiator in Rome. He had access to the collections of the Medici, Borghese, Ludovisi, Odescalchi and Farnese and had permission from the pope and the Roman Senate to produce casts from statues in the Capitoline collections. The casts were made by Manelli. 16 A first delivery arrived in Düsseldorf in 1710. Because of the serious difficulties in transporting the plaster casts without damaging them, the decision was taken to deliver the moulds rather than the casts to Düsseldorf. This is one of the few cases in the eighteenth century in which one can be sure that the moulds sold in Germany were taken directly from the originals in Italy.  17  By 1714 the collection had grown to between eighty and one-hundred pieces.  18  In the middle of the century the collection was transferred to the Mannheim palace  19  and then again in 1767 to the specially established Antikensaal at the Mannheim Academy (Pl. 6. A). The moulds were also finally housed there.  20  This ‘Hall of Antiquities’ served not only as a classroom for art students, but also as a source of models for copies of antique statues for the park of the Schwetzingen palace. Thus, the reconstruction of the inventories reveals a representative spectrum of casts taken from antique statues, in no way ranking below that of other European and Italian collections.  21  Surprisingly enough, however, only a limited number of further casts was produced from them, most of which were intended for the requirements of the Mannheim court. The
Antikensaal rapidly gained wide renown and the numerous reports in various journals of the day reflect strong interest in it. Hofmann and Socha have compiled the contemporary sources on the
Antikensaal.  22   Among them the very first one in Meusels Miscellaneen artistischen Inhalts is important, since it lauds the just opened hall in a relatively widespread public medium.  23  Goethe visited the Antikensaal in October 1769. His report of the visit, that impressed him deeply, has become famous.  24  There, he was for the first time confronted with a large number of casts of complete sculptures.  25  The casts left a profound impression on him, that he revised only when he came to know the originals on his journey through Italy. Before then, he had never seen Laocoön together with his sons even though he possessed a bust and had seen the single figure of the father in a cast in Leipzig.  26  For a certain period, the Mannheim Antikensaal, with its restriction to plaster casts, remained a solitary case. Other princes in central Germany took antique artworks out of their ‘Kunstkammer’, supplemented them with appropriate acquisitions and completed their statue galleries – partly with plaster casts after antique sculptures. Among them, Wörlitz is one of the earliest examples and certainly the most coherently designed. Following the English Country House model and built in the Palladian style, t

Copy and paste this URL into your WordPress site to embed

Copy and paste this code into your site to embed